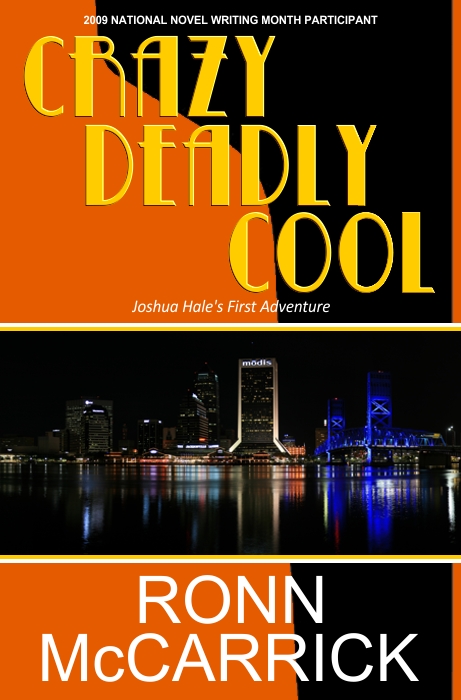 “Would you feel better with the door closed?” I asked, motioning her to one of the padded chairs in front of my desk. She waved the idea away as if it didn’t matter. I left the door open. Maybe Lucy would learn something from watching this book smart PI in action.

“So what makes you think your husband is cheating on you Mrs. Upheim.” I moved around to the business side of my desk, sat down, and pulled a pen and note pad from the drawer. A good detective always takes notes. At the top of the page I wrote ‘Erin Upheim - Client’ and ‘Cheating Husband’ below it. I’m thorough like that.

“No, Mr. Hale. Nothing so unimaginative.” She put up a hand and began to count off items on her fingers. “He’s working late. He’s bought new underwear. Started working out at the gym. Disappears occasionally saying he forgot his phone. And he hasn’t tried to get intimate in nearly a month. I know what that adds up to.”

“Sounds like a pretty solid list to me. All the right indicators. You’re wanting us to confirm your suspicions?”

This was a woman who knew what she wanted. No tears. No uncertainty. I was a little surprised that she hadn’t taken the matter into her own hands and followed him herself. That’s what women like this usually do, burst in on their husbands in the middle of a tryst. Start smacking people around. Sometimes people get shot, stabbed, hell, pushed out windows. More often though it just turns into a he said, she said situation because nothing they do is admissible in court.

“We can certainly help you with that. If your husband is cheating on you, we can follow him, but if he’s aware that you’re having him followed it could be very difficult to catch him. Does he know that you’ve come to us?”

“And you’re not going to tell him?” That's not always a given. Things get said during arguments, things that make my job harder.

“Do you know how regularly he is meeting this woman? Our fee for this sort of thing is a flat rate of,” I added up a few things in my head and came up with a price I thought she’d accept, “two thousand dollars plus any expenses that we incur during the investigation.”

“Do I pay that up front or after you catch him?”

“Mrs. Upheim, it’ll be two thousand dollars weather we catch him or not. If he’s not cheating on you, it’ll still cost you two thousand. There is no guarantee. If he’s cheating, I’ll catch him. But if he’s not, well, there’s nothing I can do about that. I’ll accept as little as twenty five percent as a retainer. But I won’t release anything I find to you or appear in court as a witness until the remainder has been paid.”

She seemed certain that he was and if she didn’t tell him she’d hired someone to follow him, I’d be able to find out quickly. Men have needs. Men involved in new relationships have a challenging time curbing those needs. Even still, two thousand dollars is a lot of money.

“I understand. I will give you a thousand now. When can you begin?” She reached into her purse and pulled out a bank envelope, counted out maybe a third of the hundreds and set a thousand dollars on the desk in front of her.

“I can start within two days, possibly as early as this afternoon. But there are a few things I’ll need from you. For starters, your husband's name, place of business, anything you can tell me about his routine; where he goes, what he does, any ideas you might have about who he might be involved with, that sort of thing.” I shuffled some file folders around in my desk and pulled out what I like to think of as our cheating bastard agreement and a book of cash receipts. “And let me get you to sign this agreement, and I’ll get you a receipt for that.”

“I’ve prepared this for you.” She pulled another envelope out of her handbag and extracted a folded paper from it. She unfolded it and pushed it across the desk towards me. “This is everything I think you’ve asked for. Geoffrey’s addresses and phone numbers, work and home. What little I know of his daily routine; lunch break, favorite restaurants, bars, the gym he's a member of, and his golf club. Also here is the make, model, color, and license numbers for each of our cars. He drives the BMW.”

“Oh, excellent, you came prepared.” I handed her the consent agreement and a pen, indicating where she should sign. “Do you happen to have a picture of him?”

She scratched her signature onto the form and pulled her wallet out. The picture of the mister was loose in the folds. Already prepared. It looked like the kind of picture you have taken for a business brochure. “Will this do?”

“Perfect.” I took the picture and paperclipped it to the notes I hadn’t taken. “I’d like to look at phone records and credit card receipts going back say six months, a year if you can manage. Would that be possible.”

She looked surprised, suddenly I wasn’t just looking into her husband's activities, I was looking at all their activities. I didn't think she much liked that.

“It’ll help if we can pick out anything out of the ordinary. Patterns.”

“Certainly. I can arrange for you to get that.”

“I’ll also need some way to contact you Mrs. Upheim.”

She handed me a card.

“This is my mobile and my business phone. Thank you for helping me Mr. Hale. I will get those papers together for you and call you as soon as possible.” She stood abruptly and walked to the door. I got up and walked her out of the office and across the lobby. As we reached the door, she asked the question they all ask.

“Do you know how long this will take. To catch him I mean.”

“You never can tell with these things, but they usually go pretty quickly once we figure out what he’s doing. Then it’s just a matter of documenting everything so that you can take it to court.”

Lucy was standing in her doorway when I turned around.

“She seems to have the answers to all the hard questions. What does she need us for?” Lucy said.

“Apparently, for all those easy questions that she didn’t know about.” Call it men’s intuition, but I didn’t think Lucy was a big fan of Mrs. Upheim.

See what I mean, men’s intuition, maybe we should call it mantuition.

“She’s a woman scorned. She’s mad. Probably, this is interrupting her day at the salon or her date with the tennis pro. Give the lady a break. She’s paying us,” I flashed the hundreds in front of her, “and as long as she’s paying, we’ll find out what’s going on with her husband. I mean really, would you cheat on a dame like that?”

“You squish your face up like that doll, and it’s libel to stay that way” And then I shot her with the finger gun.

She shook her head and went back to her desk.

“I’ve got to do a few things before I lose my license, I’ll leave the spying to you. Besides, you ask me, somebody should be checking on her extracurricular activities.”

That Lucy, such a sweetheart, always seeing the best in people. Somehow, with her gone the rest of my day got taken up by phone calls, unfinished reports, and web surfing. Probably not what Mrs. Upheim thought she was paying me for.

Given a choice I’d skip my weekly beating on the racquetball court. It’s hard on the knees, murder on the ego, and makes me sweat something awful. But I don’t have a police background and as a result I do what I have to do to ensure that they’re on my side when we rub shoulders. So, getting beat up on the court by Sergeant David Carver most Wednesday nights is my kind of networking. He beats me up on the court and it makes him feel guilty enough to help a poor, down and out private detective when I need a favor. Tonight was the exception to the rule. I beat him in three straight sets and moved up in the club rankings to eleventh.

“Don’t get cocky, Hale,” he said whipping sweat from his face with a dirty, yellowed towel, his lucky towel to hear him tell it, “even losing to you tonight I’m still a solid third place.”

I gave him my best who me smile and hitched up my duffle onto my shoulder. “You’re the best, Sarge. Don’t ever let me forget it.”

“Speaking of forgetting, I was telling the guys around the station that you had to go undercover on that big-time corporate gig you were working. A lot of them were asking for pictures of you in your blue vest. Blaine Vestry even claims to have seen you in the store. He says that you tried to hide from him. Any truth to that?”

“Come on, Dave, give me a break.” I said stuffing my racquet into my bag. “I had to wander around that place for over a month, he probably did see me... And I wouldn't call it hiding. I was busy. I might have been doing an investigation, but the undercover part meant that I did actually have to work there.”

Popular posts from this blog

November 06, 2020
Something about writing, being as it is NaNoWriMo And something about politics, since all the counting seems to be coming to a close.
Post a Comment
Read more

October 18, 2020
Well, I put on jeans today to work on the garage for the first time this season. I guess winter really is coming and summer is over. Bummer. installed back door to garage stripped hall doors removed window and installed wall HVAC unit painted laundry room I'm trying to make a decision about the future of this website. My hosting is up for renewal and if I don't renew things will go dark on November 13th. For the first time in a lot of years, I'm considering letting that happen. I haven't posted since my birthday in August (and that wasn't much of a post), prior to that it was just images on Saturdays until that queue went dry. I've made a conscious decision to step away over the last few months, just to see what it felt like to not post--to not have a website. It wasn't bad. It wasn't good. It was just something I didn't do for a bit. painted living room I guess what I'm asking is, does it matter to anyone but me? I pretty-much already know the a
Post a Comment
Read more

October 20, 2020
I used a webtool to move my WordPress site to Blogger, but all the image links and internal links stayed the same. Which means they won't be pointing to anything that exists anymore. That's a bummer, but not as much of a bummer as changing all the links and uploading all the pictures would be. I guess what I'm saying is, from this post back... things are going to be a bit jenky.  Somedays I think I should just claim that it was all lost and start from scratch.
Post a Comment
Read more

Ronn McCarrick
By day, a dodgy maintenance technician. By night, a home remodeling guru, vagabond creative, and writer of mainstream and fantasy fiction. Married. Adult children. Dog. Cat. All the rest that goes with life at the halfway point.